Explore the exotic culture of Bangkok and the tropical beaches of Phuket island. Take a stroll in the world heritage park in Ayuttaya, sample local mouth-watering cruisine and have a zero-contact with the largest animal on land - elephant! These can only be experienced by a wonderful Thailand tour. Check the following routes and all can be customized on your needs!

Plan your trip to Thailand

Thailand reopens to fully vaccinated foreign visitors, including returning Thais and foreign residents, from the approved countries to enter the Kingdom by air with no quarantine requirements from 1st November 2021.  Read More Thailand is located in the southeast of Asia. Here is the map and flight information to get to Thailand from main cities. 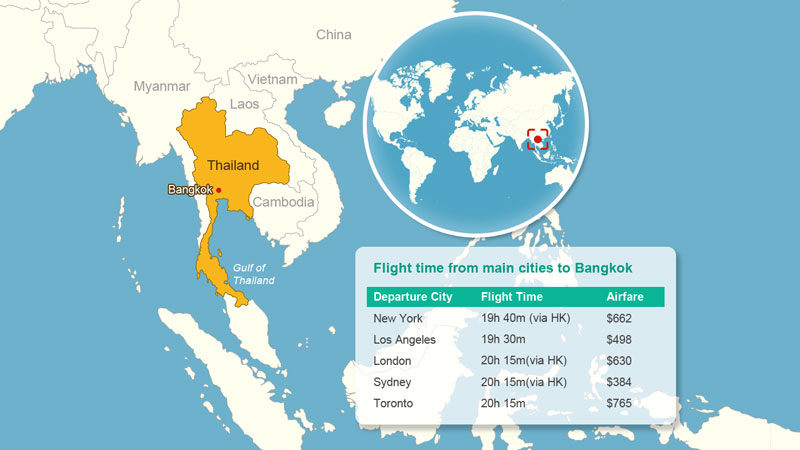 Get booked early – especially for the Christmas, Chinese New Year, Songkran Festival, and the peak seasons. About 2-3 months in advance for peak seasons or 1-2 months for the low seasons and you will find the cheapest flight.

Booking connecting flight and round-way flight for the same arrival & departure city always save more than you expected. UME private tour is open for booking flights on your own so you can use your saver award and airline rewards card.

Thailand is a great year-round destination since it keeps a temperate climate throughout the year. Its weather can be generally divided into three types: hot season (March-June), rainy season (July-October), cool season (November-February).

You can enjoy Thailand tropical atmosphere in the daytime while without the trouble of mosquito and too stuffy to fall asleep. Besides ,the south of islands will be opening up to tourists ,you can fully experience island highlights. Thai people will celebrate Loy Krathong Festival (Yipeng Festival). The annual average temperature is around 82°F/28°C. The most suitable weather for travelling. But with the rising of tourist amount, most of sightseeing with be crowdy and the price is also high.

May to June: The hottest season around the year

The temperature sometimes up to 104°F/40°C. the most funny holiday - songkran festival day comes in April, you can feel the original Thai New Year, which would give you an once in lifetime memories.

While it certainly does rain during this season it's more likely to consist of flash-flood afternoon downpours than a continual drizzle for days. The great thing is you can get an excellence hotel discount.

Rainy season in Thailand, May to October, is good for price and still enjoys a fair weather in some regions. Usually, those months will find about 20% discount. You'll get less crowded and noisy. Air and sky is also clearer. Though it's rainy season, it rarely rains all day. Storm usually comes in late afternoon which means you can start early to avoid the rain.

Booking early would also get an early bird discount and more options. Avoid the New Year and other festivals, and reserve all at least 3 months in advance, you could save as much as 50% off of rainy season hotel and airfares.

64 Countries allowed to enter Thailand under the benefit of Visa-free policy, including United States, Canada, United Kingdom, Australia, France and Germany, etc. We recommend that your passport be valid for at least six months beyond the date of your entry into Thailand to ease entry. See more

The climate differs between west (e.g. Koh Samui and Koh Pha Ngan) and southeast (e.g. Phuket Island, Koh Phi Phi and Krabi). Their dry season is opposite. Phuket and other west coast is better during November thought April. Koh Samui is more comfortable from February to September, especially for diving, snorkeling and other water activities. If you worry about travelling to beach during rainy season, then just head to Koh Samui. Sunshine and white sand welcome you there!